Setting something straight before I go any further - I am in no way questioning or challenging the T&T Monster Rating (MR), how it works, or how it is interpreted in gaming terms.

The point I guess I have been doing a poor job of making when corresponding on other blogs is this: if you cater the monsters to match the strength of the party to pose an appropriate or 'real' challenge to the party, what makes a monster unique?

Some monsters should have a minimum MR in my mind. A dragon is something that you see and you either run away or you draw your sword knowing full well, in general, what you are getting with a 'dragon'. Meanwhile, a goblin is generally a goblin. Should you have a MR 30 goblin and an MR 30 dragon? Maybe...I personally don't think so, but that is just me.

I also believe some monsters should have some special ablities, whether it be via unique SPITE or other such things, that give it some personality and set it apart from something else.

Now to some, I believe where they are coming from is that is what the GM's job is, right? To present the scenario and the encounter in a way the you would be able to tell an Orc from a Goblin from a Bugbear, from a Gnoll - I get that.

Where I am coming from is that ultimately, some monsters should have some things that set it apart from others. Otherwise, you have an MR50, MR100, MR150, MR200 monsters that are statistically the same whether you call them a goblin, or a dragon, or a gnoll, or a bugbear, or a death knight, or a....
Posted by Jerrytel at 1:48 PM 1 comment:

The Further Adventures of Jherrrii the Great, Nay Good

Updated my 'Chronicles of Jherrrii' page with some details and more than likely false memories of games past. My dwarf has now played in three of Kopfy's games; noticing pretty quickly that he is putting his life on the line for very little reward.

I have faced acid traps, various crazy critters, and perilous chasms of doom, but have no magic items and very little gold to show for my delving. Is it just Kopfy and his stinginess?

I did take Jherrrii into 'Strange Destinies' a few months back and was promptly killed by a band of wandering super colossal giant enormous ants...more on this fun event can be found here.

"OK - the solo mission that came with the boxed set - 'Strange Destinies' - is it a typo, or does the wandering monster table actually have the Giant Ant correct with a MR of 100 each???

So - when I rolled the number appearing as 3 - my lone dwarf Jerry the Great (nay Good) had a snowballs chance in hell to even damage something that is rolling 11d6 + 50 combat adds for a single ant. So technically - Jerry the Great (nay Dead) - has been killed, while he was able to dodge two of the ants while fighting the third - he was quickly ant food - in the FIRST DAMN ROOM!!! My weapon and adds are 4d6 + 49."

Talking on the 'Walla, even Ken agreed that Strange Destinies is a very difficult solo adventure and I quickly called 'Not Fair' and the dwarf is officially still breathing.

So now - I have a copy of 'The Tavern by the Sea' as well as some other solos that I think are more suited for a lowly but great 3rd level Fighter...we shall see how it goes and what riches I should discover. 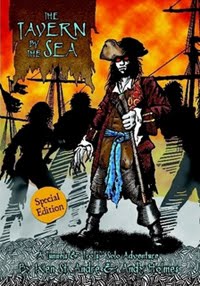 Email ThisBlogThis!Share to TwitterShare to FacebookShare to Pinterest
Labels: Chronicles of Jherrrii, Solo Adventures, Tavern by the Sea

Delving for a good time...

In an earlier post, I took a stab at creating my version of a common monster for T&T rules - the Zombie. Horror is something I have always loved, but more so the supernatural-monster suspenseful horror, not so much the hack and slash psychotic-killing-machine horror.

I had been running a horror game based on the Rippers setting using the Savage Worlds rules. My blog covering that short lived experiment is located here. While I liked the Rippers theme and also in theory like the Savage Worlds system, there is something about it that does not seem to work for me. I really need to play in a game with an experienced SW GM, that way I can see what I may be doing wrong.

So - full circle - I am thinking of doing a modern horror game based on T&T rules. Has anyone done something similar?
Posted by Jerrytel at 3:44 PM 4 comments:

Over at Troll Hammer, Paul tells the whole story better than I could ever even try...just don't buy anything from Outlaw Press.

I really have no clue why I have always liked minotaurs. More than likely, they have always had some very good miniature sculpts - from Ral Partha to GW to Reaper. Also, they are relatively easy to paint and we always had a rule that if you are going to use a monster, you have to have a miniature for it and it better be painted. One of my favorite NPC's that I have ever created, and actually still has the distinction of never being killed by my PC's, was a Minotaur I named 'Kaz' who was the first mate on a merchant ship.

So - looking through both the Monstrum Codex I (7.5 Boxed Set) and Monstrum Codex II (Delver' Pack Boxed Set), I noticed there was not a write up for a Minotaur. I then checked the Monsters and Magic book in the 7.5 boxed set and found a few more monsters, including a minotaur. With a MR of 245 and a special power of 'befuddle' on a SPITE 7 roll, this design is more in line with the Greek myth regarding labyrinths and the ability to never get lost.

Checking the AD&D Monstrous Compendium, a bit more detail is spent describing the ecology of a Minotaur, more than anything referring to aspects of the Greek Myth regarding Minos and his maze. The Minotaur is a magically altered human, basically in some way being cursed into the form of a large human with the head of bull and a fondness for human flesh. There are some versions of the minotaur miniatures that I have that depict cloven hoofs instead of human feet, and a more animal like body in general. It also mentions when a minotaur mates with a human female, the offspring is always male. This would probably explain why this 'true' minotaur is always so angry - there are no females.

This time, I did try to find something in regards to prior work done on Minotaurs in T&T by searching the internet. 'Trollish Delver' had a post a few years back regarding Minotaurs as PC's, and there looks like there was an Outlaw Press book o entitled 'Minotaur' by Shipman. I also found another solo adventure 'Labyrinth' by Lee Russell. Alas - I could not find any write up on a Minotaur's stats that I could get without dropping some money for the downloads.

Looking at the 7.5 Rulebook, the Minotaur is listed as a rare kindred with attribute modifiers:

So this is for a standard non-player character/monster Minotaur who is out in the wild or in his cave somewhere minding his own business and just trying to find a good morsel to eat. I am calling this a 'True Minotaur' reflecting the monstrous offspring, and not the cursed human.

Please - respond with your thoughts or opinions... 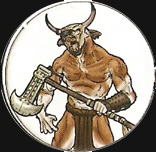 The Minotaur (True) is the offspring of a magically created Minotaur (by curse or other magic) and a human female and is always male. While the magically altered Minotaur retains mostly human features with the exception of the head of a bull, a True Minotaur will tend to appear more monstrous and could have more animal-like features such as cloven hooves and more fur on its legs, arms, and chest. The average Minotaur will also be a few heads taller than an average man, about 8-10 feet in height. Although like any race, you could see some that are smaller or larger.

True Minotaurs tend to live in small communities located in isolated places. These places are where a captured human female would be taken. The captured female would be kept alive long enough to help wean the minotaur child. She would then be set free, or eaten.

The magical nature of the creation of the original minotaurs has found its way into the ecology of a True Minotaur. They do have some natural Kremm Resistance (WIZ 30) and while they can have a taste for human flesh, they are carnivores and will eat most anything.

Some True Minotaurs in Trollworld have been known to venture away from their isolated communities and become delvers. More common, True Minotaurs are sought out as mercenaries and guards. In combat, Minotaurs are relentless, whipping themselves into a battle fury. Minotaurs will almost always fight to the death, never giving quarter unless knocked unconscious. If given the opportunity, a minotaur will 'Bull Rush' or charge into an opponent it would deem as its biggest threat at the start of a melee. It will also use its head and horns to gore opponents in combat.

Gore
When a gore occurs (SPITE 3), the Minotaur has pierced the armor and flesh of an opponent with its horn. If 3 sixes are rolled, one opponent is considered to be 'Gored'. If 6 sixes are rolled, then 2 different opponents would be considered 'Gored', unless there is only one opponent, in which case he would take all the special attacks. As with normal T&T rules, who takes the damage from a 'Gore' can be determined by the delvers after damage from the round has been determined. Then, roll on the table below to determine SPITE damage.

Fondness for Flesh
Minotaurs are carnivores, but they have a taste for human flesh as a part of their ancestry. If encountering a group of minotaurs and the party consists of at least one human or elf, the minotaurs will be more apt to attack on sight if the odds are in their favor.

Lust
Females are a Minotaur's weakness. If possible, a minotaur will go out of its way to avoid killing a human or human-looking female because he would like to make her his mate. Damage that is distributed in combat should not be applied to human or elf females unless they are the only opponents left for the Minotaur to fight.
Posted by Jerrytel at 10:57 AM No comments: