A Brief History of GMing

In my group, we refer to each GM as running his or her own game. We have never allowed characters to cross pollinate. In other words, a new GM requires new characters. In all honesty, I really do not know how likely it is to happen that a person has his character that he would carry around and bring to games for different GMs.


My first game was started way back in the summer of 1989 and originated in Amherst, OH. All of my AD&D games have been based in Ed Greenwood's 'Forgotten Realms'. I don't really remember too much about this game, other than it was my first real experience with running a game. It was based in the city of Waterdeep, which is the largest city in that world.

When I moved to Toledo, we continued playing during the summers and on weekends during the school year when I was back home. At some point (between 1990 and 1991), I started a new campaign that we would call my 'Good Game'. This was also known as the 'Hillsfar' campaign, named after the city that was the base of operations for the group. All of the characters were from the core group back in Amherst. The main characters were two brothers of a strange race of elves that were naturally psionic and the rest were a good mix of other mostly goodly characters. This game eventually transplanted to the Toledo group that started right around 1997 or 1998. A few of the characters from that core group also lived in Toledo, and they were supplemented by a new group of guys that would become the Toledo group.

I bought a house in 2000, and to celebrate a new place to play, I started a new game we would call the 'Evil Game'. Obviously, we took a 180 degree turn and decided to run with a group that would not always save the maiden, but be the ones that could be stealing away the maiden in the first place. I based this one in a city that was known for its slave auctions and feuding families. I also added some Thieves and Assassins guilds that were feuding with each other. This was a game that we had as many as 10 players at the table at times and we played almost every week.

"Whose game are we playing?"

When I was the GM, I would bounce between the two different games. For a few weeks, I would run the campaign for the good characters. Then, another guy in the group would run his game, giving me the rare opportunity to play. Then, it would be back to me and I would run the campaign for evil characters. At one point, I had the grand plan to run a story line that involved both groups of characters somewhat intermingled and on opposite sides of the plot. It did not work out all that well and I abandoned it in the end.

Then, like all good things, it all slowed down. Some guys moved away, others lost interest. My house was almost destroyed in a storm of the century and subsequent flooding in 2006. We moved to a different house to continue playing when we could, but the group had been whittled down to only a few guys at that point. The remnants that remained fiddled around with a few different things. We played a bit of 3rd edition (all of what we played prior was AD&D, 1E and 2E mixed together), and in that time I created a 3E game I started in the arabic-like city called 'Calimport'. We picked up a few new players and that game ran for a bit before I grew tired of 3E and wanted to get back to 2E. We converted the characters back to AD&D and moved the group up the coast of the realms and to Waterdeep. I had  also grown tired of the Arabic themed stuff as well. We really just needed a jump start.

I think we let the rules system get the better of us and 3E is really so much more complicated than its predecessors. Over time, we played less and less. Where we used to play every week, turned into every month. Every month turned into every few months. If we started a good run, we would then come across November and the holiday when we would be lucky if we regrouped again in February.

Since then, I have been married and now share my love for the game with my wife's kids. I started a game for the boy almost 4 years ago. This 'Kids Game' turned into a chance to involve some other guys in the group and their kids. The kids play the role of the majors, while the grown-ups play the support characters. We try to meet at least once a month, but I still run that game separately with the step kids as well. This game takes place in the same city as the 'Good Game', which allows me to re-use adventures and characters that have been around for almost 25 years.

There is a second kids game that has started since the boy wanted to play a thief. This game takes place in the same city as the 'Evil Game', throwing the characters into the same mix and the ability to re-use and repeat once again. To differentiate the two games, we use the last names of the boy's characters. The 'Darkshade' campaign (his barbarian) and the 'Starr' campaign (his thief-acrobat) are what we go by.

It is truly a beautiful thing.

A new AD&D game has now developed in the household, the boy wanting to play a thief character. Lennon Starr is a Thief-Acrobat who is a half-elf and member of a noble family in a feuding city where 3 families struggle for control. He is a psionic and has a handy Dimension Door ability which aids in his ability to perform his breaking and entering thieving jobs. His first adventure, he was hired to steal a jeweled dagger and ran into a another pair of thieves  going after the same prize.

Feldon and Dink had a good plan, complete with a manufactured 'fake' that could be left behind as a decoy. They decided to work together and split the profits, and soon the new party was in action. Feldon is a wizard while Dink is a seemingly short-minded dwarf who only says one word, his name "Dink" in various tones and inflections when he tries to communicate. Like Han and Chewbacca, only Feldon seems to comprehend what Dink is saying.

The girl has started playing as well. Her character is a mage named Rose who always seems to have the spell needed for the situation. She is just beginning to role play and it has been fun seeing her actually start to be more and more involved. In one recent adventure, she charmed a half-orc that was fighting with a group of orcs. It would later play out that he was actually not charmed and was happy to get away from his evil brethren. He has now joined the group full time as well. The girl says his name is Joseph and he is happy to go along with that.

I finally got a few of the miniatures painted - Feldon, Dink, and Joseph. The boy painted Lennon. 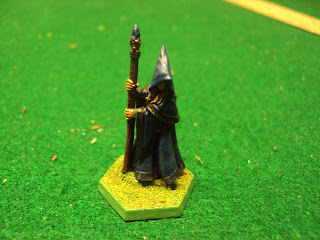 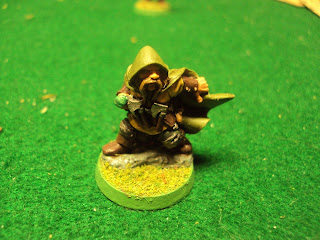 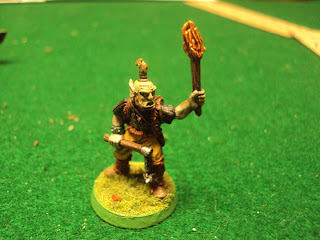