As I freely admit the few times I actually post something here, I am quite horrible at regular blogging. The first reason very well may be my own laziness. Working from home in a house full of comic books, miniatures, video games, puzzle books, and supernatural podcasts; it is quite easy to simply find something else to do. The second reason very well is the reality that while I like T&T and use it as my way to actually publish things once in a great while, my real love always has and will be That Other Game.

So...Bash Con - what happened in the last 3 years?

Luckily Tom and Robin are very consistent with their documentation. I should be able to piece together fragmented memories from his ramblings/her facts and come up with something that may well be close to what actually happened.

The plan for 2019 was to tackle the two biggest issues I was having recently with running D&D events at Bash Con;

1. Bash Con management's inability to avoid over selling an event. Their system of collecting event information changes every year. On top of that, they are usually missing a very crucial field like start time, duration, number of players, and game system. As a result, I am assuming whatever passes for their onsite registration system is not very good at tracking how many tickets should actually be sold.

2. Too many players. My AD&D games were always billed as kid friendly and I never had a problem with filling the table. My recent D&D 5E games are just packed because there is not much 5E being run at the convention in general and the overselling issue listed above. (Edit - this is obviously a singular problem in the end...I am not that bright sometimes or I like lists.)

The 2019 plan was for myself and Robin to jointly run a 5e adventure - my conversion of Keep on the Borderlands - specifically just a run at the infamous Cave of Chaos. I had maps, characters, and scenarios plotted and prepared and posted everything to a private FB group that I shared with Robin. Tom and I were also going to plan to jointly run a Stay Alive! adventure dubbed 'Bad Moon on the Maumee'. I requested the large room we have used before (that could easily accommodate 12 players) for both games in September. No response at all from them on that request until 3 months later in January.

Note: piecing together historical records from the Peryton FB page - 2019 Bash Con was probably the worst ever planning wise by the students. Every year we lament on how bad a year was - this was the low water mark (or high water?). Nothing for events was processed and even posted on the website until a week or two before the con. The Con itself is very much 'locals show up and register/play games'. The people that did show up had nothing to play - I think the only events that were even in the schedule were our events and a few others. I wondered how this would affect 2020.

Friday night was a planned break from the reality of the con's normal routine. The lines are long, the organization is horrid, and games usually do not go off or get any players.

For Part 1 on Saturday we had a large group (at least 12) and we split into two parties. Robin took one and I think they headed towards the hermit scenario while my group went after the bandits that had been harassing the supplies to the remote keep. About 1-2 hours in, as my group was fighting the bandits in their camp that they had snuck up on at night, Robin's group was breaking up and most were leaving. Liam was in that group and he said they had met up with the hermit, completed the scenario, and then Robin called the game to an end. Since there was more time left, I took on any players that stuck around and then the combined group started exploring the Caves before we finally finished the session.

Note #2: that is my recollection of the Robin group. I do not know if I had not sufficiently informed her that she should proceed with another of the many scenarios I had prepared, or if she thought 'screw this, I am done'. I think every GM does their own thing. Tom and Robin are more 'wing it' GMs while I may be an over-preparer - I probably scared her away.

The Saturday evening game ended up being run solely by Tom since we did not have a very large group. Tom and I had tried to plan ahead using a FB shared document. I think the general theme was prohibition era/bootlegging Toledo where I drew on some historical articles on the Detroit-Toledo-Windsor corridor run by the mob. I helped Tom with some character roles and some stats for my SA! werewolves. The boy and baby girl both played I believe.

Note #3: I love how Tom believes that 10 players is not enough for a 2 GM game! The reality is that I was very poorly prepared and Tom stepped up to cover for me on the story side of things.

For Part 2 on Sunday, I ran the large party on my own and we proceeded through more of the caves for that session. Many of the players from the previous day had returned. I believe I just told Robin that I would handle it.

We talked to the Bash Con staffer who promised 2020 would be better. Liam vowed that as freshman at UT, he would infiltrate BASH and help return the con to its former glories...

Here is my first statement in the 2020 planning post on the FB group: I am unsure what I want to do. I am leaning against running D&D since the problem is I get too many people and the convention does not understand the concept of only selling so many tickets. I am more apt to run some T&T/Stay Alive! sessions instead.

In the end, we decided to run events 'off the book' and just amass at an open table. However, Tom submitted one of his games so as not to have him feel left out, I submitted my Stay Alive! game, the sequel to 'A Little Horror on the Prairie' that I called 'A Bigger Bother in Boss City'.

The effects from the disastrous 2019 were real - along with mine and Tom's singular events, the rest seemed to be a group running Pathfinder/Starfinder and a group running Steve Jackson. Cory's 'Feast of Legends' game I think made the website but was not in the program.

For my Friday night game, I was actually fairly well prepared. I did a lot of research on Sidney, Nebraska (The Boss City) which was reported to be the wildest boom town in the west. I had prepared an initial scenario on the road (which was eventually published in an Elder Tunnels: The Bloody Inn) and then the main story involving my SA! versions of mind flayers and intellect devourers. Unfortunately I had two things go against me; Tom and Robin were running late and did not make it in time and because of that, the game was filled with 3 strangers (along with Max, Liam, and maybe Irelynn) who had no history with T&T and were probably just playing the game because it was not Starfinder or Pathfinder. So, an hour into the game, new characters were completed (Liam was the only existing character from the previous campaign), and the Bloody Inn ended up taking more time than I thought. The Bigger Bother in Boss City will have to come another day. We all went to dinner at Chilis (Tom, Robin, Irelynn, Liam, Max) that night.

Nothing was planned Saturday morning and in the afternoon I decided to give the auction a try for the first time in a few years. The normal and longtime runner of the 'bazaar' has not been involved for many years and under student management, the event has degraded. Generally, too many non-gaming items and poor hosting. I was pleasantly surprised at the products offered and stayed for most of it. I completed my Nuclear War collection, grabbed a slimmed down version of Blood Bowl I did not know existed, and also bought a Top Secret boxed set I did not have (among other things). 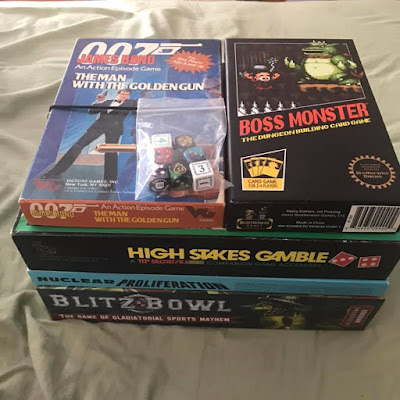 During the auction, I think the rest of the peeps (Tom, Liam, Max, Robin) played in Corey's rpg (the Wendy's one). I also missed Robin's evening game (Gangbusters) so I am guessing I went home to deal with the beast (the dog Lexi) or I had to help Tracey get Irelynn and her friends to something or other.

As is the usual tradition - we met for Mexican food at the place on Secor. Robin had prepared a 'Quitter's Club' award for Tom since he blew off his Saturday game - One of Us!

No Bash Con because of the China Flu.

Ever since I was introduced to them, I have been hooked on the miniatures side of the hobby. Like most of my fellow hobbyists, my plans usually far outweigh my productivity. The 'Lead Mountain' is what some call it - the backlog of unpainted miniatures just waiting in the queue.

Ahead of the convention season in 2020 I was able to complete the additional Circus Imperium gladiators to add to the races we run at Fort Meigs and Gen Con, but unfortunately all conventions were cancelled in the year. Also completed my personal Olive chariot. The next thing for Circus is an expansion of my track set-up. Hoping to get to that in the summer. 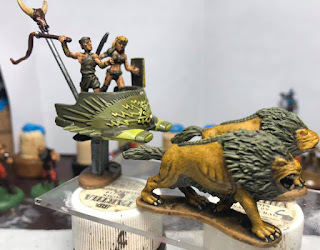 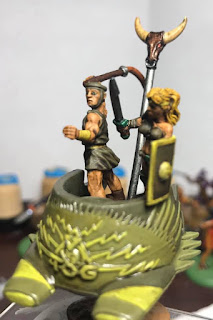 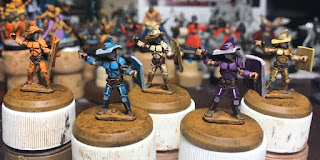 Near the end of the year I really wanted to clean off the work bench and finish items that have been sitting there in some cases for years half completed. These are my favorites of the year... 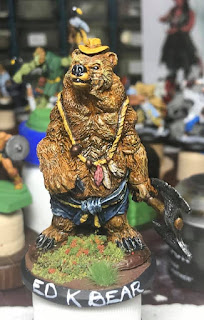 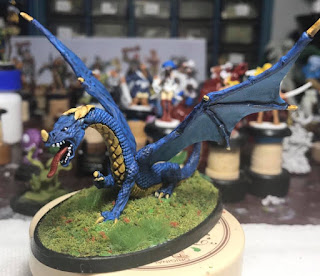 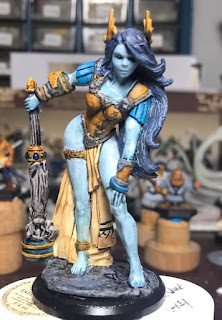 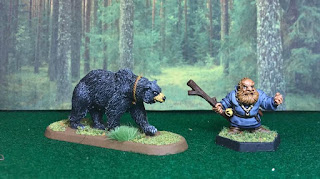 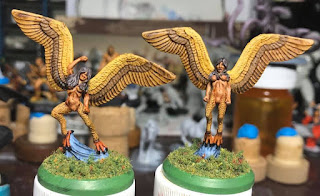 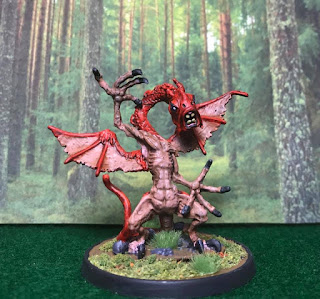 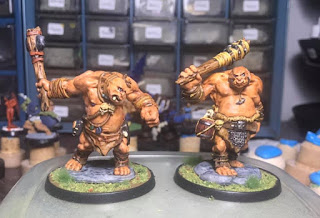 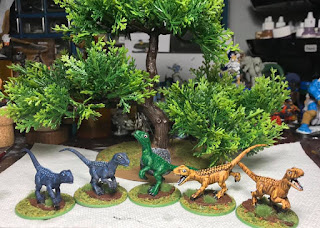 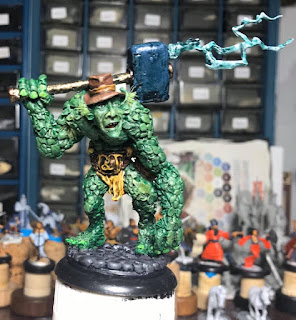 The D&D game for 2021 would shift to the jungles for the Tomb of Annihilation, which has been the primary focus of my painting so far this year. More of that to come next time.

The Revenge of the Weekly Game

The one thing that this far east flu brought about for me was a resurrection of the old gaming group via zoom/discord. Being one that loves to use all my miniatures and scenery and other props, I was always quite reluctant to jump full in on the online gaming thing.

Sure - I had been invited to some games that utilized game specific software, but it was never quite the same for me. Playing in online games with some people I barely know was more similar to playing with strangers at a convention. Another thing that I am not all that fond of.

The comradery and friendships is what was always missed. Reminiscing, laughing, and recounting tales of past memories will always be half the fun. The other half is breaking new ground and new stories to tell. 4 guys in Toledo, 1 guy in Atlanta, another in Columbus, and a new friend from roundabout Louisiana have been brought back together through the magic of an internet connection and a web camera. 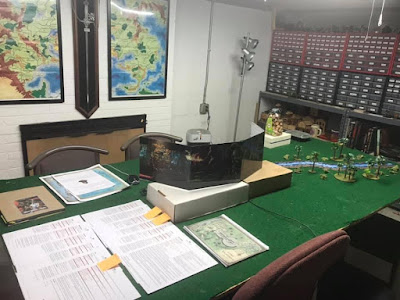 Have I told you about the renewed vigor of painting little metal and plastic models? More on that will come next time around...