Gen Con 2015 was fun, having a chance to spend 5 days with the boy in the gaming paradise. The boy had most of each day scheduled and to his credit, did not miss a single event he had signed up for. 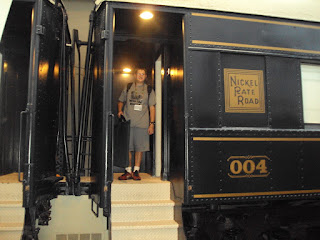 We were able to book a train car this year at the Crowne. Being right across the street and connected by sky walk to the newer section of the convention center, it was a perfect location for the boy who is a planner and thus, was nervous about his routes to get to his games. I had map printed out for him and we walked to each room he would need to go to. He had discarded his maps by Thursday night. 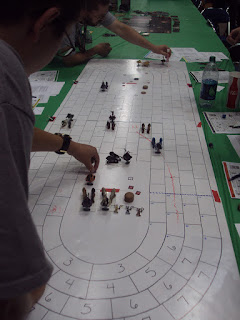 The boy had a Stay Alive! rpg with Kopfy in the AM, followed by our first Circus Imperium event. Harper and his friend Diego grabbed the last two tickets and a fun race ensued. One player died on the first turn; another shortly thereafter. Diego was dragged and then trampled to death on the third lap. In the end, a total of 5 players did not finish the race and one player was dragged across the finish line for 3rd place. 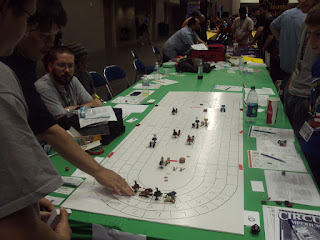 On the way to dropping off the minis and the board at the hotel, we ran into Robin who was on her way to meet Caed to get some dinner. We caught up with them at Champions for some grub before Liam headed off for his night game, Outbreak Undead. I spent the rest of the evening at the auction, as I did during the morning as I was pressed into volunteer coordinator this year with a few absenses. All went relatively well with the auction in general. I only bought a few games: a werewolf card game that was not selling that I grabbed for $5 for our future Circus Imperium prize bag, and in the charity auction, a game that someone else had bought and had not picked up (a pirate game that I cannot remember the name of and I am currently too lazy to go to the basement to check on).

Friday, the boy had a zombie miniatures game in the AM which he reported was not very good. The people running it did not really run it at all; they simply explained the rules and walked away. I will remember to not partake in that group's games anymore. In the afternoon, we played in an awesome Space Hulk game by a group of brothers calling themselves The BoD. The boy played one of the two Tyranid roles (aliens) and I was one of the four space marine squads. The boy played very well and took pleasure in wiping my squad out and denying me even coming close to completing my team goal. 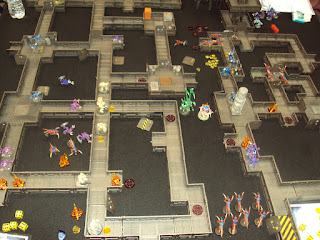 The boy had nothing else to do in the PM and after we wondered out to Steak and Shake only to find it packed tight with customers, we walked back to the auction, grabbed a few leftover sammiches and went back to the hotel for an early night. 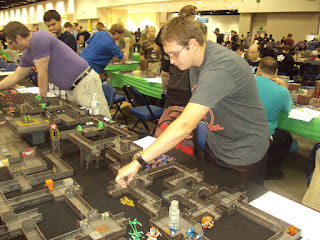 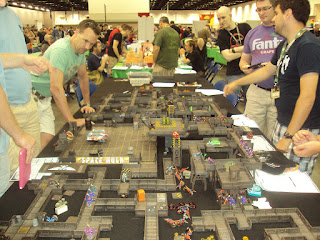 Saturday, the boy had two speed painting sessions in the AM. Between the two, we ventured into the Exhibit Hall to get our free dice and then bought the boy some paint brushes and a set of dice. Being too crowded, he wanted nothing more to do with the Dealer Hall and he went to his other painting session while I returned to the auction.

We then ran our 2nd Circus Imperium game. This game was a blast because the entire table knew eachother - 3 couples and then 3 more friends. It was also a game that featured more cab jumping than I have ever seen. One of the husbands bashed his chariot and beasts up running on the walls for most of the first lap, so he jumped into his wife's chariot and they proceeded to fight over it for much of the second lap. She finally defeated him and won here chariot back, but with only one life point left. She ended up taking the lead back and winning the race. 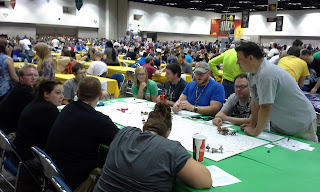 a
I think overall, there were 2 or 3 deaths in this one including at least one trample death and even more chariots destroyed, beasts killed, and one nice drag. Robin and Batman had walked by; Robin hung out with us for most of the race and took some pictures. 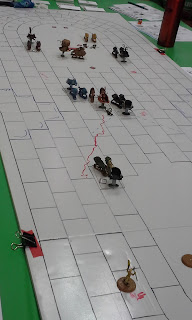 The boy grabbed some leftover taco bell for dinner and then struck out with Kopfy for his late night Crawlspace game at 11pm. I made it back to the hotel room relatively early for a Saturday. We actually ended the charity auction right around midnight and had the final sort completed well before that. I auctioned the final items of the night including 7 or 8 Star Wars banners from past conventions.

Back at the room, I watched some SyFy movies with Robin - a horrible one with Nicholas Cage (Drive Angry?) followed by 'House of Bones' which Robin already had mentioned in her blog, could have been a straight rip off of one of Kopfy's games from a few years back (and he also ran it at this year at Gen Con - Horrible Fate of the Haunted House Hunters). I tried to stay awake until the boy got back, but I drifted off to sleep by about 2am.

Sunday was easy going. The boy did not want to attend his 10am Crawlspace game with Kopfy, but I reminded him he needed to bring the rulebook and decks of cards for Kopfy. So he did end up playing in the game and then promptly returned to the hotel for a nap. I woke him up at 6pm to go to dinner with me. The auction dinner at Buca was overcrowded, so we tried to hook back up with Kopfy and Robin, but they were already on their way to their place of choice. We went to an overpriced steakhouse that I will never go to again. We then returned to the room, watched some Ninja Warrior and Happy Gilmore with Kopfy and Robin. Kopfy ordered in some dessert and we had a well earned relaxing night.

Monday - we packed up and got on the road after dropping off Kopfy and Robin at their car parked at Batman's house. One of my tires picked up a nail on the way to Indy, so after filling it back with air, we made it home OK. I had to fill it again with air on Tuesday and then take it to the dealership to get plugged and fixed.